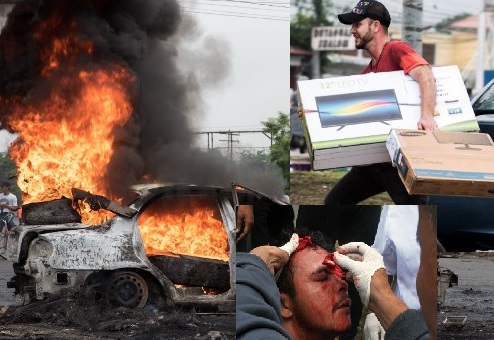 A car set on fire by supporters of Honduran presidential candidate for the Opposition Alliance against the Dictatorship coalition Salvador Nasralla during protests demanding the final results of the weekend's presidential election, burns in San Pedro Sula, Honduras, on December 1, 2017. Fresh clashes broke out Friday between riot police and opposition supporters in Honduras, as the counting of votes in a cliff-hanging presidential election rolled into a fifth day. Police said at least 12 civilians were injured, some by gunfire, after violence erupted in several parts of the country -- sparked by opposition candidate Salvador Nasralla claiming fraud and calling his supporters onto the streets. / AFP PHOTO / JORDAN PERDOMO