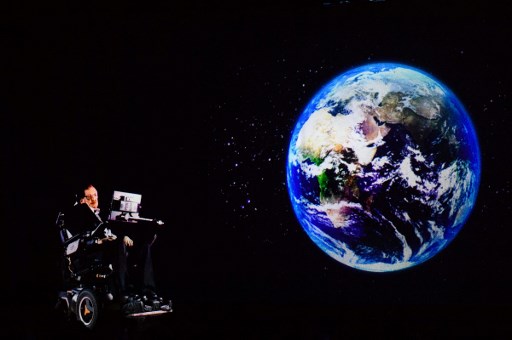 In this picture taken on March 24, 2017, renowned physicist Stephen Hawking, 75, speaks to an audience by hologram (L) in Hong Kong, beamed live from his office in Cambridge, England. Renowned physicist Stephen Hawking has spoken to a Hong Kong audience by hologram, showcasing the growing reach of a technology which is making inroads into politics, entertainment and business. The British scientist appeared on March 24 before an audience of hundreds who cheered and snapped pictures with their phones as he discussed his career and answered questions about the possibility of life on other planets, the use of technology in education and the impact of Brexit on Britain. / AFP PHOTO / Anthony WALLACE